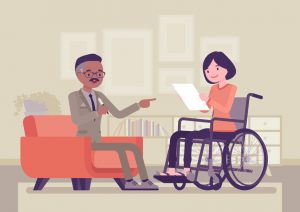 Lawsuit awards and out of court settlements can either arise from a physical injury or non-physical injury, the latter being taxable.   Damages types can include compensatory, emotional and punitive damages and may or may not be taxable to the recipient.  Awards are taxable unless they are listed as not under the tax code.

Damage awards on account of physical injury or illness are excludable from gross income.  Typical damages that would be tax free include lost wages, pain and suffering, emotional distress, medical expense reimbursement and attorneys’ fees.  Awards for Punitive damages and Interest are usually going to be taxable.  Your settlement agreement or court judgment will spell out the terms of the award and the allocation.  It is a good idea to consult an attorney before signing off on a settlement to evaluate the tax consequences.  If the agreement is silent or considered a general release, the tax courts will look to the nature of claim that gave rose to the action to determine the type of award.

Many lawsuits and damage awards arise in the employment context, including injuries and discrimination claims.  Tax courts exclude from gross income amounts which are received by an employee under a workmen’s compensation act, or under a statute in the nature of a workmen’s compensation act which provides compensation to employees for personal injuries or sickness incurred in the course of employment.  Workers’ comp awards should be differentiated from disability claims paid by insurance companies, which may or may not be taxable.

Employment discrimination claims are usually taxable and the real issue is whether they are ordinary income or income subject to employment taxes.  Awards for wages (back pay and front pay) are going to incur greater taxes as they are subject to social security and Medicare taxes.  Liquidated damages for violations of employment law are not considered wages, though still are going to be taxable.  As stated for personal injury settlements, it is important to have a tax lawyer review the proposed settlement so the recipient understands the tax consequences prior to consenting.

If the proceeds from your lawsuit are included in income, then generally your award for attorneys’ fees are going to be taxable to the litigant, even though they are paid directly to your attorney.  This creates major tax problems for certain taxpayers now that certain itemized deductions have been eliminated under the recent tax reform.  For certain employment claims, attorneys’ fees can be deducted above the line as an adjustment to gross income, so there is not tax consequence for the litigant.

Even if you are working with a litigation attorney on your lawsuit, it is advisable to consult a tax attorney to understand your tax liability on your settlement.  Many settlement agreements even advise the litigant to do so prior to signing.  If you have questions about the tax consequences of your damages award including the reporting requirements, please don’t hesitate to contact me.