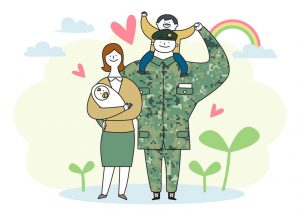 With so many members of the military stationed in the D.C. metro area, it is important to understand the federal and state tax considerations for the armed forces and their families.   The tax code is loaded with favorable tax provisions for servicemembers and tax preparation can become quite difficult when is comes to state taxation for domicile and residency.   Members of the armed forces also have unique consumer rights, as outlined by the Service Members Civil Relief Act.

Numerous favorable tax provisions exist specifically for members of the armed services, including the exclusion of income related to certain pay and benefits, deductions for unreimbursed moving expenses and special rules for exclusion of sale of principal residences, to name a few.  Gross income does not include compensation received for active service in the armed forces for any month during any part of which served in a combat zone.  Form W-2, Box 1 should automatically adjust military pay excluded from income under the combat pay exclusion provisions.  Similarly, housing and cost of living allowances while serving abroad paid by the government are not taxable.  Though most taxpayers can no longer deduct moving expenses, member of the armed forces on active duty and, due to a military order, are granted the deduction for a permanent change of station.

Tax law emphasizes the importance of home ownership by allowing you to exclude gain (up to $250,000 per taxpayer) when you sell your main home, if you owned the home and used it as your residence for at least 2 of the previous 5 years.  The 24 months of residence can fall anywhere within the 5-year period; all that is required is a total of 24 months (730 days) of residence during the 5 years.   If you or your spouse are a member of the uniformed services or the Foreign Service, or an employee of the intelligence community in the United States, you may choose to suspend the 5-year test period for ownership and residence when you’re on qualified official extended duty. This means you may be able to meet the 2-year residence test even if, because of your service, you didn’t actually live in your home for at least the 2 years during the 5-year period ending on the date of sale.

Your home of record is the state recorded by the military as your home when you joined. This is not necessarily the State you should continue to use as your tax home as you move from state to state (or overseas) on military orders.  Your State of legal residency does not change unless you take active steps to change it.  The law protects your military pay from the income taxes of the State in which you reside by reason of military orders unless that is also your legal residence or domicile, and that no change in your State of legal residence/domicile will occur solely as a result of your being ordered to a new duty station.

Servicemembers may consider changing their domicile to move favorable tax states, including: Florida, Texas, Alaska, Nevada, Washington, New Hampshire, Tennessee, Wyoming and South Dakota.  The change would require physical presence in the new State with the simultaneous intent of making it your permanent home, and abandonment of the old State of legal residence.  In most cases, you must actually reside in the new State at the time you form the intent to make it your permanent home.  Your intent to make the new State your permanent home may be indicated by certain actions such as: (1) registering to vote; (2) purchasing residential property; (3) titling and registering your automobile(s); (4) applying for a drivers’ license and (5) opening banking accounts.

The Service Member’s Civil Relief Act (SCRA) provides a wide range of protections for individuals called to active duty and deployed, by postponing or suspend certain civil obligations. This law enables servicemembers to devote full attention to their duties and relieve stress on their family members. Such obligations may include interest on credit card debt capped at 6%, deferrals of mortgage payments, stay of default judgements, suspension of tax obligations for 180 days, the prevention of evictions and right to terminate a lease early. The law serves to protect the rights of servicemembers while attending to military duties.